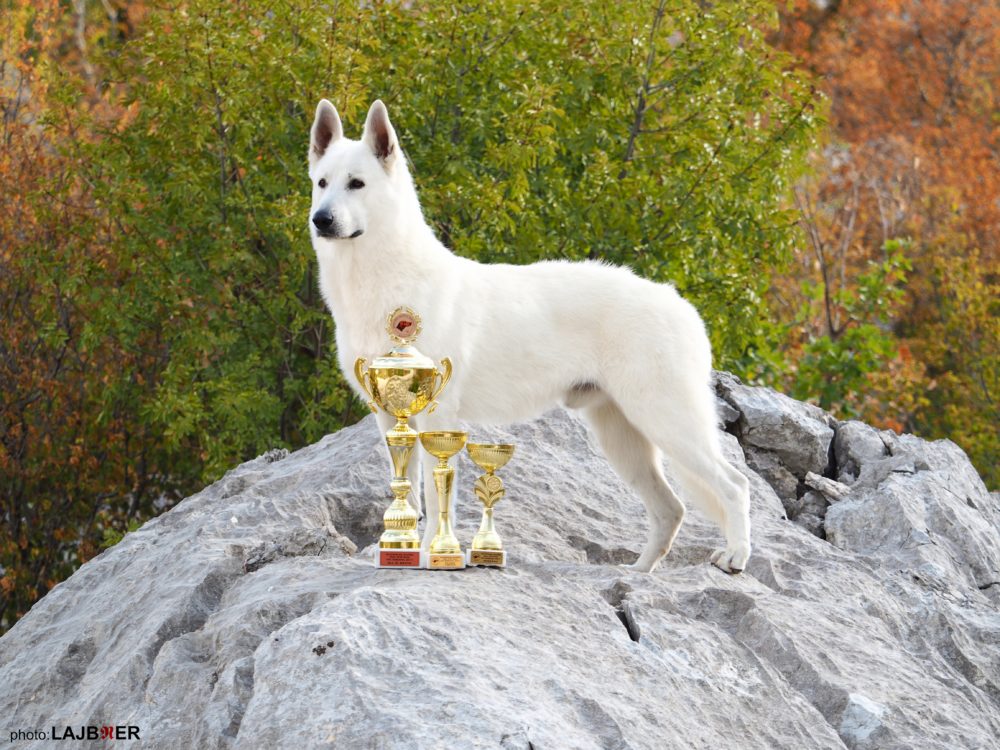 Interchampion / Multi Grandchampion AXEL Donnevara is a perspective healthy White Swiss Shepherd with excellent pedigree, exterior and character. He was born on 18.1.2016 in Donnevara kennel in the litter A2. Both parents are very successful showdogs, Czech grand champions and champions, club champions and a lot more. Father BARNET is also an active canistherapeutic dog and takes part in working exams and competitions. He has passed more than 10 exams so far, such as IPO 3, ZVV1, ZZO 1, SPr3 and other.

AXEL loves balls, baloons, sticks, cones and just anything he can chase. So we always train obedience with a ball. e is very active, we regularly go jogging, cycling, swimming, and most of all he loves fetching balls, sticks and cones. It seems he never gets tired. From dog sports, we do canicross, bikejöring and dog-scootering, modern dog sports in harness, which we all enjoy a lot. When we take out the harness at home, Axel leaps in joy uncontrolleably, he looks so much forward to it. We regularly take part in canicross races and obstacle races. Axel won some great placements. At the Mud Dog Race 2019 he finished 1st and at Experience Run 2020 he was 2nd, Extreme dog race 2021 – night run 2nd in his cathegory. He also regularly takes part in the biggest obstacle race in central Europe – Hard Dog Race (2019 – 2021).

As for the exterior, he is a dog with strong skeletton, strong masculine expression, very good pigmentation, he has well formed legs with correct angulation and nice elegant movement. In quite a short period of time he achieved a lot of successes in shows and we can be proud of all his titles and awards. He achieved the highest possible show title “C.I.B. – Interchampion” at the age of only 2 years and 5 months. He is a champion and junior champion of many countries. In the yearlong competition for the best show dog in the Czech Republic season 2016/2017, he finished 3rd, in 2018 4th and in 2019 again 3rd among all WSS in the Czech club (if points from abroad counted too he would win). In the yearlong Open Slovakia Dog Cup 2017 he ended on a lovely second place from all WSS exhibited in Slovakia that year.

He has the best possible health results. Apart from the compulsory health tests, we had him tested for many other genetic diseases, all of them with negative result. He is FCI stud dog. He fulfilled the conditions for a stud dog even in other countries, not only CZ. His blood sample has been tested for DNA and is stored at the clinic for reproduction in Switzerland.

Axel is the father of 9 litters (in the Czech Republic, Poland, Germany and Switzerland), 72 puppies altogether, he is also the grandfather of 33 puppies already. We keep Axel primarily for the mating with our females, but if we plan less than 3 own litters in a year, it is possible to offer him as stud elsewhere in the Czech Republic (the Czech Club restrains the number of mating with 1 stud dog to maximum 3 Czech females per year). For foreign females, the number is not limited. The stud fee is 1.000,- Eur.

For more information about Axel or the possibility of mating, please do not hesitate to contact us.

His pedigree on pedigreedatabase here.