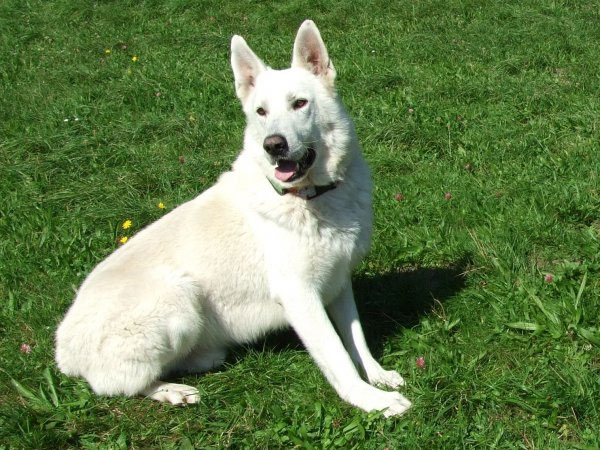 AZOR come to us by coincidence when he was about 2 years old. His former owner did not manage to take care of him any more. He was a notorious run-away. No fence was high enough for him, so his former owner often lost his temper and finally gave up his effort to keep him at home. We couldn’t cope with the idea, that a completely healthy pedigree dog would be euthanased. So we did not hesitate even a second and we took him home with us. At first he was very fearful and alert, so we had to cope with him very slowly and cautiously. He had experienced quite a lot, so it was no wonder. During the time he got used to living with us, and our other dogs and he became an equivallent part of the pack. Even though he still kept his cautiosness a bit. We did not have any special show ambitions with him, but when he was with us, we took him along to a few shows. Sometimes he even won his class.

From time to time Azor and Niktel measured their strength at the garden and fought a bit to learn who the new pack leader would be. Usually the quarrels ended up undecided, sometimes with a torn ear or sometimes swollen eye. Otherwise he coped with other dogs very vell and was very easygoing.

He left us suddenly and unexpectedly at the age of 8, when he suffered from perforated gastric ulcer. Unfortunately he did not survive till the morning on the veterinary clinic, where we exported him immediately after the accident.